“The marking of the Croatian Armed Forces is an important event, combining the history of the state of Croatia, the victory in the Homeland War and a 29-year path from the Croatian National Guard to the present-day modern, professional and credible armed forces. I am taking the opportunity to express gratitude to all Croatian defenders, the missing, the fallen and wounded Croatian defenders and their families for their contribution to the freedom of Croatia”. The Prime Minister also expressed respects and gratitude to the fallen soldiers and pilots in the post-war period.

The Prime Minister also stated that his Government invested major efforts to ensure a balanced development of the Croatian Armed Forces.
“The goal of the Croatian Government is to further improve the efficiency and capabilities of the Croatian Armed Forces, to upgrade its defence capabilities and international image. To fulfil that goal the Government is committed to equipping and modernising the Croatian military and upgrading of the standards of Croatian soldiers. The defence budget has increased for four consecutive years, after a six-year reduction period.
We restored the Armed Forces units to Sinj, Vukovar, Varaždin, Pulu and Ploče, conveying a clear message that the Croatian military was with the people and by the side of the people”. The Prime Minister also stressed that the efficiency of the Homeland Security System was evident in a number of events such as fires, floods, and COVID-19 epidemic and earthquake relief.

“The Croatian Armed Forces have assisted in all crises, and merit our appreciation. You are the force protecting the Croatian people, and I am taking the opportunity to congratulate on the forthcoming Statehood Day, marked on 30 May again”, emphasised the Prime Minister, and concluded by announcing that the facility “Vukovar” would in the near future be integrated into the new Defence and Security University.

State Secretary Ivić: The opening of the accommodation facility “Vukovar” is a symbol of the transformation of the Croatian Armed Forces

“We have restored material rights and are continuously upgrading the living and working conditions in the military installations; we have restored the dignity to Croatian soldiers. The opening of the accommodation facility “Vukovar” is a symbol of the transformation of the Croatian Armed Forces”, said the State Secretary

“Next year, coinciding with the jubilary 30th anniversary of the establishment of the Croatian Army, will see a transformation of the Croatian Defence Academy into the Defence and Security University “Dr. Franjo Tuđman”, as an institution of special national interest”, said State Secretary Ivić.

Maj. General Jurković: “Vukovar” is a symbol of the new period, a link between the past, present and the future

The Deputy Chief of the General Staff of the Croatian Armed Forces Major General Siniša Jurković said the new facility was named after a symbol of the freedom and guard of the identity of Croatia.
”The opening of the facility is of huge importance for the Croatian Armed Forces, expanding the existing capabilities with a new dimension of accommodation and living at the Croatian Defence Academy. I believe the facility will be an additional motive for the young people to join the Croatian Armed Forces”. Maj. Gen. Jurković also said that “Vukovar” was a symbol of the new period, a link between the past, present and the future
Prior to the formal opening the visitors toured the sports grounds of the Croatian Defence Academy, and the Commander of the Academy Major General Mate Pađen presented the future congress hall to be furbished at the Academy.

The visitors also toured the facility “Vukovar”, which was blessed by Vicar General of the Ordinariate Marko Medo, and the Croatian Navy Vocal Ensemble “Sv. Juraj” performed a musical programme

The ground floor houses the reception desk and the living room, and the accommodation units occupy 1st – 13th floors. The 14th floor houses a restaurant, and the 15th floor comprises a gym with the bath and a terrace. The facility was built is by the firm Lavčević d. d. , the works commenced in late 2016 and the total cost amounted to 55 mil HRK (VAT included). 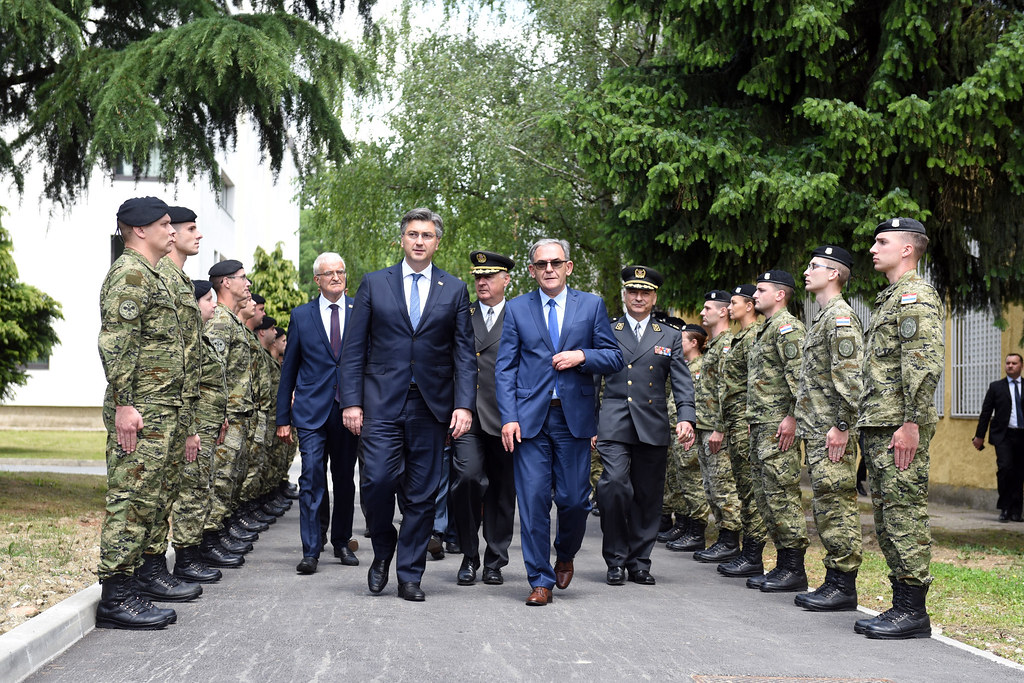