The Croatian Defence Academy on 26 June 2020 hosted in the barracks in Zagreb a ceremony marking the completion of the 2019-2020 academic year and the graduation ceremony in Zagreb | Photo: MORH/ F. Klen

The Croatian Defence Academy “Dr. Franjo Tuđman” on 26 June 2020 hosted in the barracks in Zagreb a ceremony marking the completion of the 2019-2020 academic year and the graduation ceremony in Zagreb on 26 June 2020.

Congratulating the graduates the State Secretary for Defence Tomislav Ivić as Envoy of the Prime Minister presented the future development of the Croatian Defence Academy, prepared for by the adoption of the Act on the Founding of the Defence and Security University. “We have also directed our efforts on the upgrade and building of new infrastructure in the Croatian Defence Academy, as evidenced by the new accommodation facility and the upgraded sporting facilities, and we are also building a congress centre, with the support by the Croatian Government, to provide the future University with a modern campus”, concluded State Secretary Ivić.

The President of the Republic Zoran Milanović extended congratulations on the successful completion of the education:
“You have now completed solid and strict education programmes and will be assigned to your units and missions in Croatia and within the international military co-operation and collective defence activities. In a year’s time the world will be even tighter connected but also more complicated, making your role of guarding the Croatian independence and sovereignty more demanding, but also serene and admired, I hope, and a path for creating your careers and families”, said President Milanović.
The Chief of General Staff of the Croatian Armed Forces Admiral Robert Hranj stated that the students’ profiles themselves reflected the focus on life-long learning. “I am pleading with you to be ambitious in your future career, to set high aims and strive for excellence, stated Admiral Hranj, sharing his pride over the Croatian Defence Academy’s prospective transformation into a modern educational and research institution.

Bidding welcome to the students and visitors, the Commander of the Croatian Defence Academy Major General Mate Pađen stressed that the past academic year was particularly challenging in view of the COVID-19 pandemic and the earthquake, which forced the Academy to adjust the training process within short time to enable the students to complete their education. 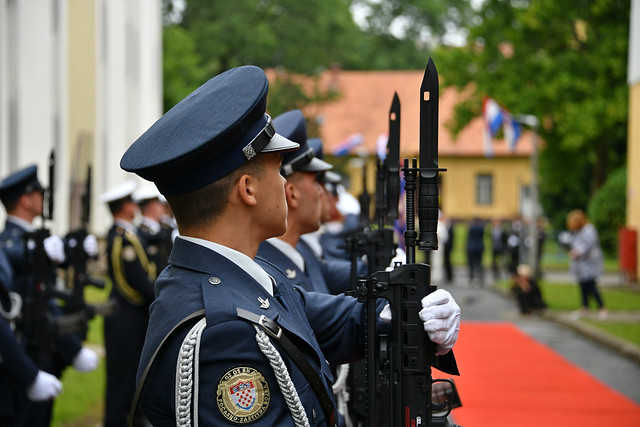