The State Secretary of the Ministry of Defence Tomislav Ivić and the Chief of the General Staff of the Armed Forces of the Republic of Croatia Admiral Robert Hranj on 9 June 2020 visited the fire associations of the Istria | Foto: MORH/ M. Čobanović

The State Secretary of the Ministry of Defence Tomislav Ivić and the Chief of the General Staff of the Armed Forces of the Republic of Croatia Admiral Robert Hranj on 9 June 2020 visited the fire associations of the Istria County and of the Primorje – Gorski Kotar County.

They first visited the premises of the Istria County Fire Association, where the Commander of the Dino Kozlevac, presented the fire-fighting organisation in the County and underlined the excellent co-operation with the Ministry of Defence.

The members of the Civil Protection Headquarters presented the COVID 19 preventive activities.
The delegations also met with the acting Prefect of the Istria County Fabio Radin and with the Mayor of Pula Boris Miletić.
State Secretary Ivić praised the co-operation for the part of the Ministry of Defence and congratulated the Civil Protection Headquarters of the Istria County for the successful crisis management during the COVID-19 situation.
“The headquarters of the Istria County did an excellent job, ensuring a favourable situation in Croatia compared to the countries in our neighbourhood. We can be proud of what the Homeland Security Situation has achieved over the past months”, said the Secretary of State.

The Chief of General Staff of the Croatian Armed Forces, Admiral Hranj praised the opportunity to assist the local community when necessary.

“Thanks to the operation of the expert services and the co-operation at all levels, from the national down to the municipal level, in emergency situations our system works the best possible”, said Prefect Radin.
Mayor Miletić addressed appreciations too: “The expertise of our people and the unity of the citizens are the strength of Istria. We showed again our ability to respond to the most difficult situations, protecting health and lives of our citizens”. The Mayor of Pula also underlined the excellent co-operation with the Ministry of Defence, which is demining the area of Vallelunga in Pula.

The senior officials also visited the Public Firefighter Unit Pula, and observed the presented capabilities, and then the Junior Firefighter Camp in Fažana.
The Chief Firefighter Commander in the Republic of Croatia said over 1,000 children aged 12-16 take the training at the Camp every year.
The officials concluded their visit touring the Firefighters Training Centre at Šapjane, where the members of the Engineer Regiment of the Croatian Army have been carrying out works assisting the Fire-fighting Association of the Primorje – Gorski Kotar County. The observed the demonstration exercise with the Flashover containers simulating indoor fires

By engaging its engineer resources the Croatian Armed Forces continue their active support to civilian institutions, which is one of their primary missions. 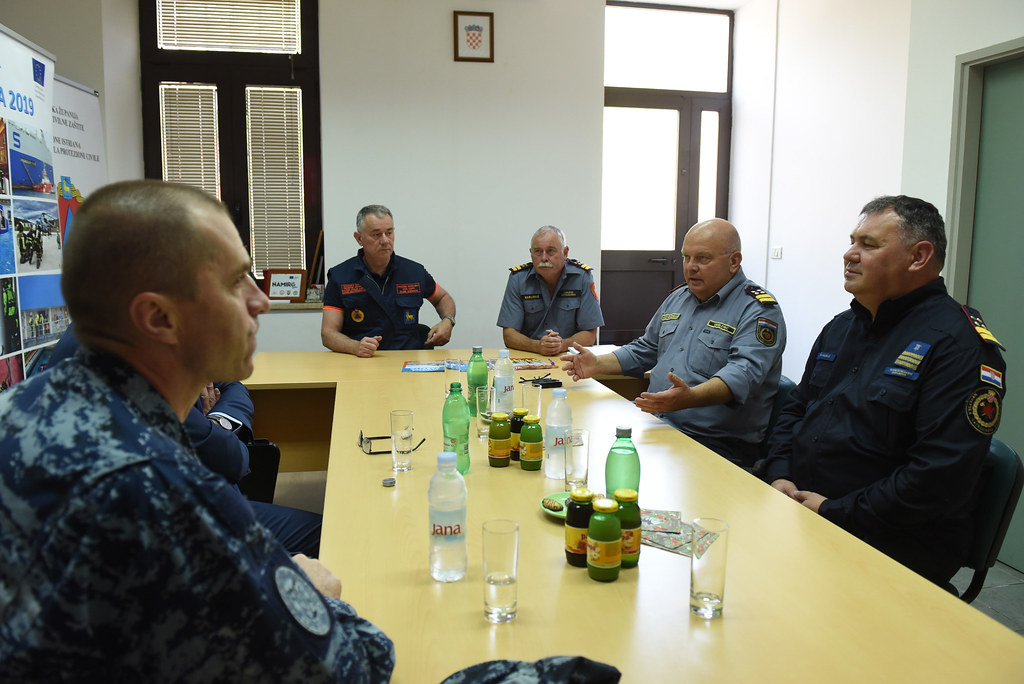